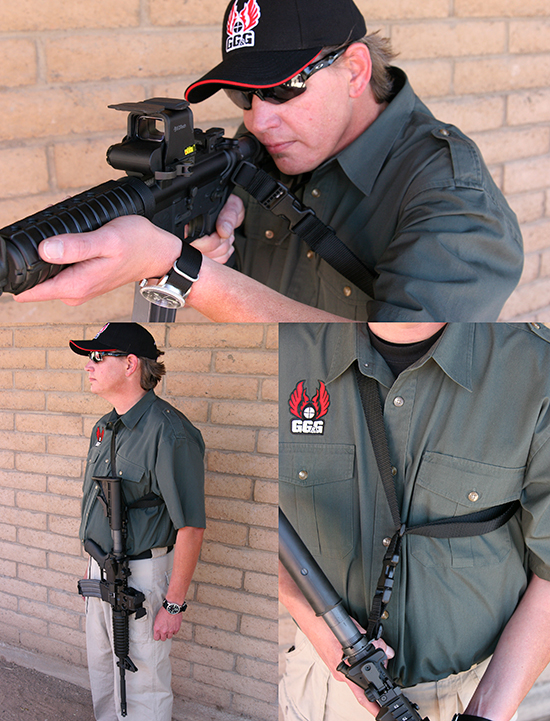 The 580 MOUT Sling was designed with direct input from US Military troops returning from MOUT operations in Afghanistan and Iraq. Designed specifically for Military Operations on Urbanized Terrain (MOUT) this sling offers some serious advantages that are equally useful to law enforcement tactical units, armed citizens and practical shooting competitors.

The 580 MOUT Sling excels in the urban dynamic entry role. Used on a weapon with a GG&G Receiver End Plate, the body loop secures the sling to a single mounting point. This arrangement allows the operator to simply arc the buttstock over the sling for an easily accomplished cross shoulder transition. Should a secondary weapon transition be required the weapon drops naturally to the offside, muzzle down, clearing a path to the sidearm and allowing an unobstructed secondary weapon transition.

This is also a very useful feature for competitive practical shooters. When coming onto, or off of, the firing line, the weapon can be quickly and safely locked in, or disengaged without any wasted time or effort in adjusting the sling. Additionally, with spare buckle assemblies attached to several different weapons, you're guaranteed to have consistent sling fit with each weapon, since only one sling is involved. The MOUT Sling is constructed from the same 1" and 1.25" webbing that Specter uses with their CQB and SOP Slings. The MOUT Sling is an ambidextrous design. Therefore, no left or right hand versions are required. These slings are available in Black, Olive Drab or Coyote.